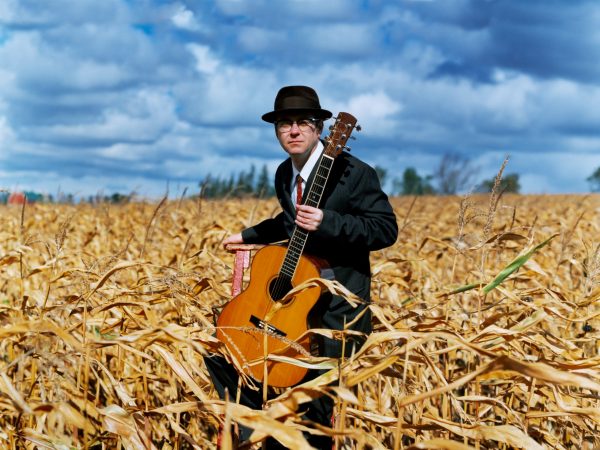 During the heyday of the Queen Street West music scene in the 1980s and early ’90s, Scott Bradshaw, a.k.a. Scott B. Sympathy, and his band plied their rock folk sound several times a week in the Big Smoke, issuing two acclaimed indie albums in “Neil Yonge Street” and “Drinking With the Poet.” On Friday, Toronto’s Curve Music — which has just signed a North American distribution deal with Warner Music Canada — will reissue both projects. To say that Bradshaw is pinching himself is a bit of an understatement. – Nick Krewen, Toronto Star

Scott B. Sympathy’s birthday tribute to the late Joe Hall

Just prior to the release of his two seminal Scott B. Sympathy albums, Scott Bradshaw recorded this affectionate birthday tribute to his great songwriting mentor and friend, Joe Hall, who passed away two years ago. It was recently recorded in Scott’s backyard. – Paul Corby, Roots Music Canada

At 19, Toronto-born up-and-comer Renforshort is already breaking the mould

The multifaceted teen artist, who started writing viral hits while still in high school, is showing no signs of slowing down—in fact, she’s planning a move to L.A. and working on expanding her sound beyond anything she’s released before. – Rayne Fisher-Quann, NEXT

40 at 40: Back to the working-class country music bars on Queen Street

“You can learn a lot playing on Queen Street and I know plenty of musicians who have. Some musicians never want to get off Queen Street, others can’t.” –  Michael Hollett and Kevin Ritchie, NOW

Veteran talent manager Jake Gold will be the featured teller of tall tales on this week’s Promoter 101 Storytellers. Gold will join host Dan Steinberg to share a selection of sordid stories and titillating tales from his years in the entertainment industry, followed by a moderated Q&A session. – Celebrity Access

The Ottawa-based duo Twin Flames is one of the leading nominees announced in the inaugural edition of the Summer Solstice Indigenous Music Awards, handed out next month.  The husband-and-wife team of singer-songwriters Chelsey June and Jaaji are in the running for four awards, including recording artist of the year, including pop/rock/alternative album of the year for Omen. – Lynn Saxberg, Ottawa Citizen

Their glistening West Coast sonics recently earned them a Juno nomination for Breakthrough Group of the Year. Neeko remembers rubbing sleep from his eyes after a late-night recording session as he heard the news: “I woke up to a text from Sol and I was like, ‘Is this a dream? What’s going on here?’” – Laura Robinson, NEXT

No Tickets At The Door is a stark but hopeful snapshot of the city during the pandemic. – Richard Trapunski, NOW

“Now that we’re all as local as possible all the time, the physical proximity — like, whoever’s closest — is who we end up working with.” – Alex Hudson, Exclaim!

Sony Music Entertainment has signed new multi-year licensing deals with the two biggest owners of music streaming platforms in China – NetEase Cloud Music and Tencent Music Entertainment (TME). The news marks a fresh licensing structure for Sony Music in China, which has previously licensed its catalog exclusively through TME in the region. Sony already has a long-running JV label with TME, in the shape of Hong Kong-based Liquid State. – Tim Ingham, MBW

Sony Music has confirmed that it has completed the acquisition of two companies from Kobalt Music Group: recorded music company AWAL and Neighbouring Rights (formerly Kobalt Neighbouring Rights). However, not every hurdle has been cleared: Sony’s announcement comes in the same week that the UK’s Competition and Markets Authority confirms it is opening an investigation into the double acquisition, which Sony has previously valued at $430M (Kobalt is a UK-based company). –MBW

The Hollywood Reporter reports: “French media conglomerate Vivendi is considering the sale of an additional 10 percent stake in Universal Music Group, the label home of the likes of Taylor Swift and Lady Gaga, to a U.S. investor.” – Digital Media Wire

French media giant Vivendi said on Tuesday that it may sell an additional 10% of Universal Music — the label behind acts including Lady Gaga, Justin Bieber, Taylor Swift, and Kendrick Lamar — ahead of floating the group by the end of September 2021. – MarketWatch

How to go to a concert again, according to experts

Here’s what to know before heading to an indoors general admission show again.–  Sadie Bell,Thrillist

Forty years ago, the Birmingham band released their debut album, and its frank, forthright songs about sex and equality are still pertinent. They explain how music gave their anger a voice. – Paul Walsh, The Guardian

Demi Lovato comes out as non-binary

Singer Demi Lovato has revealed that they are non-binary and will be using the pronouns ‘they’ and ‘them’ going forward. – Variety

Three decades since he took off Chasin’ That Neon Rainbow and Alan Jackson hasn’t stopped writing his love story for country music. He returned May 14 with Where Have You Gone, a new studio album where the plain-spoken wordsmith sings about fatherly love, once-in-a-lifetime loss and the barn-burnin’ honky-tonk music that remains near his heart. – Matthew Leimkuehler, Nashville Tennessean

Live Nation is reopening Irving Plaza, one of New York City’s most beloved venues, after an extensive multi-million dollar renovation. To kick things off, over 40 shows are confirmed as part of the venue’s grand reopening. Ashley McBryde will be the first artist to perform on Tuesday, August 17.  The venue is ready to host 1,200 fans – Live Nation

Bat Out Of Hell: The real Jim Steinman

When Jim Steinman died in April, the only thing most people knew about him was his joined-at-the-hip relationship with Meat Loaf that resulted in the Bat Out of Hell album. But Sylvie Simmons got to see another side of Steinman, the one without the Loaf. That side had Steinman in a Fugs/Blue Cheer cover band, working with the Sisters of Mercy (the goth band, not the nuns) and putting together a raunchy girl band he called Pandora’s Box. – Sylvie Simmons, Please Kill Me

John Hiatt was set to record his follow-up to 2018’s The Eclipse Sessions in April 2020, then the pandemic hit.  “As musicians, we were the first ones out, and we knew we’d be the last ones back in,” says Hiatt as he reflects on the last year. When everything shut down, he wasn’t sure when he and Douglas would be able to create this record together. –  Chuck Armstrong, No Depression

Who sang the ‘ahh’ part in the Beatles song A Day in the Life?

A minor social media skirmish erupted recently when the fan site Beatles Earth posed a question on Twitter. Who is singing the dreamy mid-song “Ahh” part on the Sgt. Pepper’s Lonely Hearts Club Band song A Day in the Life, it was asked. The passage in dispute kicks in at the 2:49 mark, right after Paul McCartney sings “I went into a dream.” – Brad Wheeler, The Globe and Mail

‘We got shot at’ – the outrageous life of Jayne County, the first trans rock’n’roller

She partied with Warhol and fronted a band called The Electric Chairs who were too shocking even for punk. As her extraordinary tell-all memoir is republished, Jayne County relives one of music’s most astonishing sagas. – Alexis Petridis, The Guardian

From eerie folk lullabies to bouncy b-sides: Ten of the Chills’ best songs

New Zealand band the Chills is releasing a new album, Scatterbrain. To celebrate, we count down 10 of their top songs. – Kiran Dass, The Guardian

Ericsson Globe in Stockholm has been renamed Avicii Arena in honour of Sweden DJ Tim Bergling (aka Avicii). In revealing the name Tim’s father Klas said, ”It was a significant milestone in Tim’s career when he played here 9 years ago, and he would be extremely proud that this iconic building from today will bear his name.” – Paul Cashmere, Noise11

Strike A Pose: Doc follows dancers from a famed Madonna tour after the lights dimmed

Re-released to coincide with the 30th anniversary of Madonna: Truth or Dare which chronicled the pop singer’s 1990 Blond Ambition tour, Strike a Pose, from 2016, captures a moment in time though perhaps not quite as extraordinarily as the before-mentioned documentary which has become a kind of benchmark for depicting backstage celebrity. – Kim Hughes, Original Cin

A beloved and highly respected writer, Dellar worked for NME from 1972 until the mid-’90s, and wrote the Fred Fact column for the magazine as well as compiling the crossword and contributing reviews, features and more. – Rhian Daly, NME

NFTs: Are they the future of the music industry? – BBC...

World watches as Biden takes over a ‘humbled’ U.S. struggling to...